A couple of days ago, a friend told me about an incident that had occurred on a plane where a middle-aged man was found to have epistaxis (bleeding from the nose) midway between a 4-hour flight. Although epistaxis has various degrees of severity and only a small percent are life-threatening, the sight of blood, no matter the amount, is a cause of panic and anxiety for everyone. Hence, the cabin crew was called and helped in managing the patient until the flight landed.

Some of the causes of epistaxis on a flight are dryness in the nose due to changes in cabin pressure and air conditioning. Other causes depend on patients’ previous health problems, which may include medications such as warfarin, bleeding disorders, nose-picking.

As important as it is to learn the emergency management of epistaxis in a hospital setting, often you come across a scenario such as this, in your daily life and its essential to know how to manage it, out of the hospital setting or even in the emergency department, while taking history or waiting to be seen.

The following are a few steps you can take for initial conservative management of epistaxis:

If the following measures fail, further medical management may be advised.

Epistaxis is acute hemorrhage from the nose, nostrils, nasopharynx, and can be either anterior or posterior, depending on the source of bleeding. It is one of the most common Otolaryngological Emergencies. 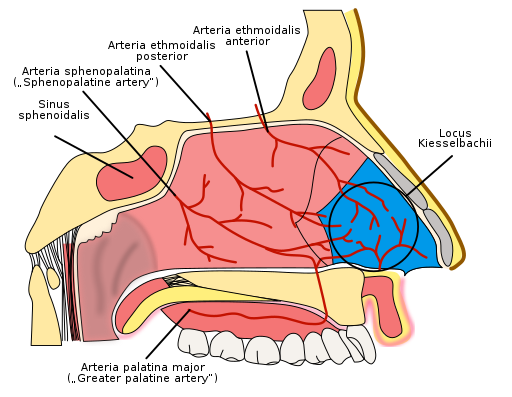 Posterior bleeds are less common and occur from posterolateral branches of the sphenopalatine artery and can result in significant hemorrhage.

I am a final year medical student studying in Dubai, with a profound interest in EM in resource limited settings, public education, research, and spreading awareness on first response emergency care. Outside of medicine, I enjoy photography, traveling, writing and volunteering. View all posts by Sumaiya Hafiz, UAE

This site uses Akismet to reduce spam. Learn how your comment data is processed.